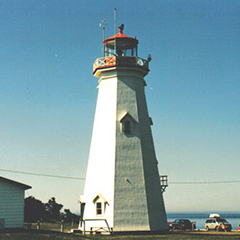 Because of its location at the extreme eastern tip of the Island, there is glass all around the lantern allowing the light to be seen for 360 degrees.

It is constructed with heavy hewn timber with a shingled exterior. It has a well-proportioned facia at the top of the tower and a cross braced wooden railing. The windows and door are topped by triangular pediments trimmed red. The interior has three landings and 67 steps. It’s the last of the Colonial lighthouses to be built on PEI.It stands 19.5m (64 feet) tall.

Visitors can climb to the top, view some lighthouse memorabelia and the meeting of the tides. They can also see the nearby wind farms.

The fog alarm building, adjacent to the lighthouse, has been converted into a cafe and gift shop. It is also painted white with a red trim.

The third building, formerly used for storage, is currently used for washrooms.

Visitors can enjoy the picnic area located adjacent to the lighthouse.

Points East Coastal Drive - Take Route 16 to the northeast point of Prince Edward Island and then continue down Lighthouse Road for 2.1 km (1.3 miles) to the East Point Lighthouse. The lighthouse is open daily from mid-June through Labour Day.

During the busy shipping years of the mid-1800’s, there was a pressing need for lighthouses, which the Island’s Colonial Government was unable to afford. James Warburton, Colonial Secretary, sent a report of the House of Assembly of Prince Edward Island dated May 12th, 1851, to the Government of Canada, which suggested Canada, the British North American colonies, the United States and even Great Britain provide “proportionate contributions” toward the construction of lighthouses at North Cape and East Point, as the lighthouses at these locations “would be of greater utility to the Shipping interests of the Countries referred to than to the similar interests of this colony.”

Petitions from area residents were presented and tabled by Prince Edward Island’s committee on lighthouses. In 1861, George Dundas, Lieutenant-Governor of Prince Edward Island wrote to the Governor General Head in Ottawa, insisting that immediate measures be taken at North Cape and East Point because of the many accidents occurring at these two locations. Dundas’ request was passed on to Public Works who suggested to the Governor to request from Prince Edward Island the likely cost of each lighthouse, and how much of the cost the province itself would look after. It was only when residents at North Cape rigged a portable lamp on a makeshift stage in 1865, that £500 was allotted for the construction of a tower at North Cape. A year later, money was allotted for the construction of a tower at East Point. W.H. Pope was paid £25 for his efforts in obtaining grants from Canada and New Brunswick to help offset the cost of construction of the East Point tower.

The East Point Lighthouse, built in 1866-67, is a major coastal light that serves all marine traffic using the Canso Strait to the Gulf of St. Lawrence.

The East Point Lighthouse and the lightkeeper’s dwelling were built by William MacDonald. The keeper’s cottage was also completed in 1867 with additions in 1885 and a replacement in 1923. The strong timbers have withstood the test of time for over 140 years. The lighthouse was moved twice. The tower was built about a 0.8 km (half mile) inland from its designated mark on the charts.

On September 12th, 1882, the 1,137 ton British warship, HMS Phoenix ran upon a reef off East Point. Although the blame was put on the “negligent navigation” of the Phoenix, many believed that the location of the lighthouse was the real cause of the misfortune. Charts showed the Lighthouse on a point, while, in fact, the Lighthouse had been built approximately half a mile inland. As a result, in 1885 the Lighthouse and keeper’s cottage were moved 1600 feet east, to within 200 feet of the edge of the point.

There is conflicting information about the fog alarm building. Federal Heritage Review Board Report 90-256 states that the fog alarm building was built in 1885 as a one-storey structure with a T-shaped formation. The fog horns sprouted from the hipped roof of the “leg” of the T. In 1908, an engineer’s room and 50-foot chimney were added and the T-leg of the original building was removed. Doors and windows were also altered.

In the 1960s, a fog detection service balcony was added to the lighthouse and one window was converted to a doorway. The balcony was removed in 2002. The generator was removed in 2000, and the fresnel lens was replaced by a beacon of lower intensity. Other than minor changes, the tower exterior is in almost original condition.

There have been many changes to the light station buildings. In 1923, a two-storey house was built to replace the original dwelling. An addition was made to the house in 1949-50. In 1966, two new three-bedroom dwellings for assistant keepers were completed. These have been sold but have remained in their original location. The older residence was declared surplus and removed after it partially burned in 1972. The keeper was badly burned in that incident.

Moved twice, its fourth order lens was removed in 2000 and replaced by a modern optic. 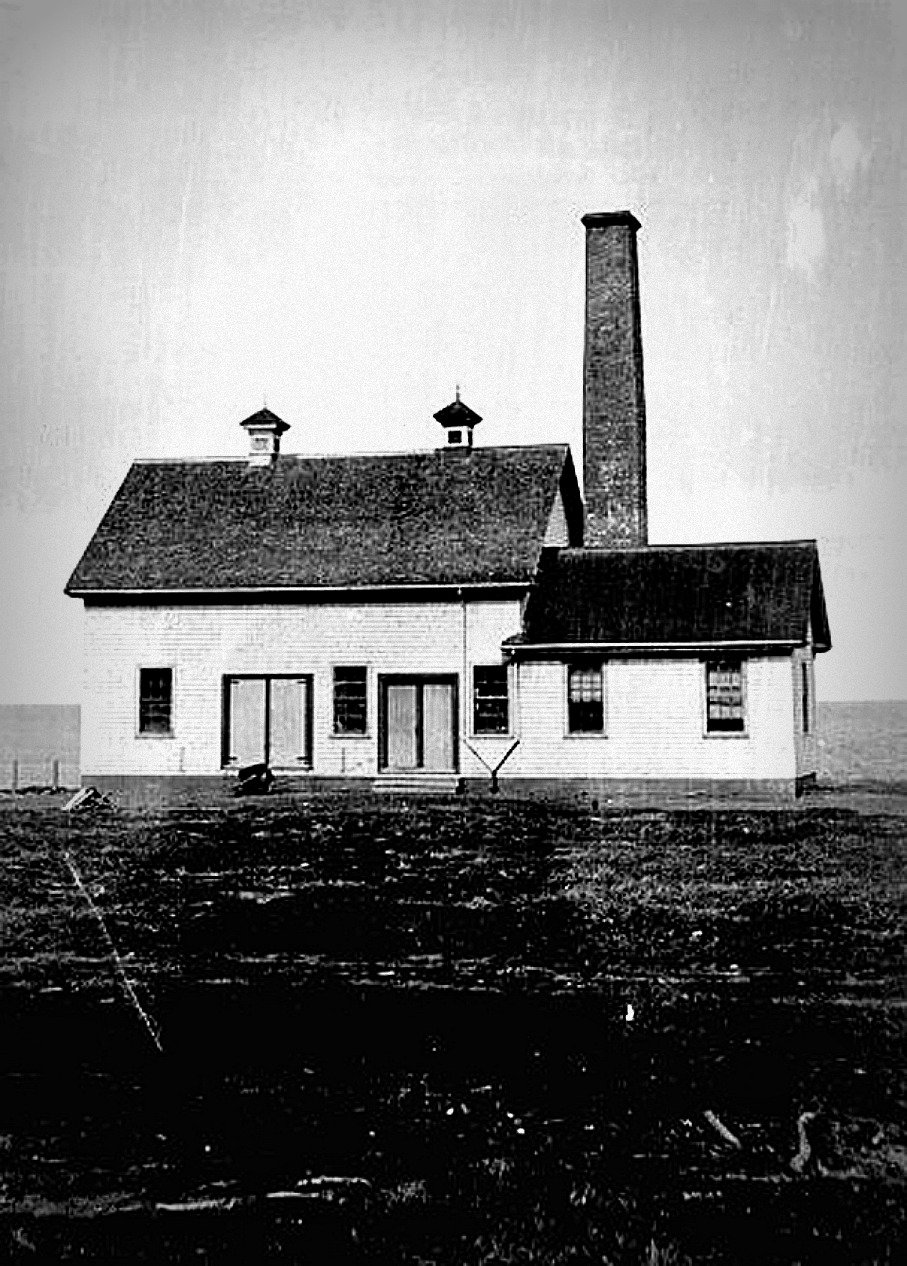 The following is a list of known assistant light keepers:

The light keeper was responsible for the overall operation of the light station which included the lighthouse, fog alarm building, three dwellings, shed(s) for oil and coal, and a radio building.

* Please note: There is inconsistent information on the lightkeepers and assistants.

The lighthouse was transferred to the Friends of Elmira in 2010.