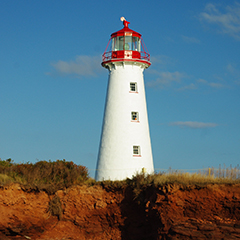 Although the total height of the lighthouse base to vane is 18.2m (60ft), the circular tower is only 49 feet high. It was built of local brick, and due to rapid weathering of the island brick it had to be sheathed and shingled two years later. The lighthouse was painted white in 1848. The base diameter of the tower is 23 feet and the top diameter 11 feet. The walls of the tower are one foot thick. The original stone foundation has since been covered in concrete.

The cast iron lantern is 10 feet in diameter and 13 feet in height, showing ten glazed panels, of dimensions 30 inches by 60 inches. A strong wooden floor supports the lantern. There is a service ladder that runs from the top to the lantern deck The lantern deck is supported by decorative wooden brackets. On the floor of the lantern deck there are vents between each bracket and just below them all around the tower there are small vents. There are vents in the walls of the metal lantern. The four windows are vertically banked on the sloping west wall. All the windows have a thin molding at their base. A similar molding is over the door on the east wall.

There are three landings in the tower below the lantern deck, connected by straight runs of stairs. The wooden weight shaft is still in place down the center of the tower, although not in use. On one of the floors there are benches curved to the shape of the tower.

Points East Coastal Drive - From Highway 1 in Belfast, 22 km (14 miles) northeast of Wood Islands, turn west onto Highway 209 (Point Prim Road) and drive 10.9 km (6.8 miles) to the end of the road where you will find the Point Prim Lighthouse.

An excerpt from the Islander, a discontinued local newspaper, which appeared in the Guardian of Oct. 26, 1949

" ... We may observe that the site for the building was given by the Right Hon. the Earl of Selkirk through his Land Agent, William Douse, Esquire and will add much to the importance of that part of his Lordship's property. The House of Assembly have provided a grant of money for its erection, and the work will be commenced forthwith. " ~ The Islander, April 5, 1845.

Point Prim Lighthouse was constructed because of two memorials that were presented to the Lieutenant Governor calling for the construction of a lighthouse to guide marine traffic into Charlottetown Harbour. One of these memorials was from the Directors of the Prince Edward Island Steam Navigation Company which ran the St. George, a steamer which sailed regularly during the summer months between Charlottetown and Pictou, Nova Scotia. The other memorial was from a group of merchants and ship owners. Commissioners were appointed to look into the possibility of constructing a tower at Point Prim. It was agreed that one was needed.

A prominent Island architect, Isaac Smith, was asked to design a plan for the lighthouse. Born in England, Isaac immigrated to Prince Edward Island in 1817 when he was 22 years old. He had little formal training, but was a talented carpenter and architect. By the time he designed the Point Prim Lighthouse, he had already designed some of the most prominent buildings in the Colony, including the Lieutenant Governor's residence; Fanningbank, St. Paul's Church in Charlottetown, the Round Market, jails, a Lunatic Asylum, and Province House. Not only did Smith design this lighthouse but he also over saw the contruction of it.

The first light source was seal oil. There were four lamps used from 1845 to 1849 when three more lights were added.

The original lighthouse property was nine acres across the end of Point Prim. This amount, however, has been greatly reduced over the years due to severe erosion of the shoreline. The Department of Transport considered moving the lighthouse but it was found that the lighthouse could not be moved. A concrete retaining wall was constructed in 1982 by the Canada Coast Guard along the south and west sides of the point to prevent further erosion.

When the light was automated in 1969, the keeper’s cottage and oil shed were sold and removed. Its fourth order bulls eye Fresnel lens, replaced early in 2010, is part of the museum display. 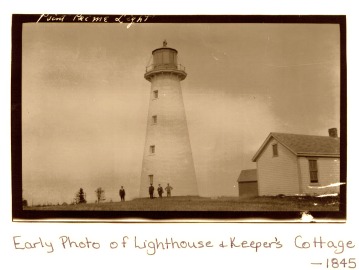 From 1845 -1969 there were eleven lightkeepers. Each man served with distinction and diligence. Each understood his responsibility and never wavered. Some left little history behind and others have long and rich stories that follow them through the generations, but our standing lighthouse and the unknown countless lives saved, prove each man was a lightkeeper extraordinaire.

1845-1854 - John Ings served as the first lightkeeper at Point Prim, when with great ceremony, the lighthouse was lit on December 4th, 1845. Born 1788 in Portsmouth, England, he came to Canada in 1810 and practiced his trade as shipwright until he was appointed as Point Prim’s first lightkeeper. He spent the first year sleeping on the second level of the lighthouse while the keeper’s cottage was being built. Although the cottage would always be too small for the lightkeeper’s families, they would often join him during summer months when the weather was mild.
John and his son, William, had devised a signalling code which was used anytime something was urgently needed at the lighthouse. William’s home was on a high piece of ground overlooking Pownal Bay, part of the Tea Hill District. The distance between them was about ten miles by sea. Each week, at a chosen time, John would signal William and supplies were brought. John Ings retired in 1854 and lived on to a great old age of 99.

1854-1857 - Ewen MacLeod was appointed to his position in 1854 and continued until he became ill during the summer of 1857. Two Point Prim men, John Gillies and Donald MacPherson, took over his duties until a new keeper was appointed.

1857-1867 - Finlay MacDonald was grandson to Findlay MacDonald, an original Selkirk settler, who came over on the vessel “Dykes” in 1803. The “Dykes” was the second of three vessels that brought Scottish settlers to this region in 1803. The “Polly arrived first, the day before the “Dykes” and the “Oughton” arrived a month later.

1867-1870 - Simon Murchison - Both Simon and Finlay were keepers during a very interesting time in Canadian history. It was during Finlay and Simon’s time as lightkeepers, 1864-1867, that the concept of a Canadian Confederation was brewing in Charlottetown. The waters were filled with ships bringing important dignitaries to and from the Maritime Provinces. Point Prim Lighthouse was a welcome sight as ships approached Charlottetown Harbour

1870-1872 - Finlay MacDonald was appointed a second term and kept the light for two more years.

1872-1873 - Alex John MacRae - MacRae’s family immigrated from Scotland in 1816 and settled as farmers. Alex might have farmed but little is known of his daily life.

1873-1897 - Michael MacLeod - Was grandson to Donald MacLeod who immigrated to Prince Edward Island on the ship “Polly” in 1803. Michael was the second longest keeper at Point Prim, tending the light from 1873 until he died at his post in 1897.

1897-1910 - Donald Gillis came from a long line of seamen and carpenters. While he attended to the light from dusk to dawn, it’s believed that he worked in the building trades during the day.

1920-1955 - Angus A. Murchison returned from duty in World War I and purchased his home (owned by former keeper Simon McLean and built by keeper John Ings) in Point Prim. He was appointed light house keeper in 1920 and served for 35 years, the longest running keeper. Ordinarily the lighthouse was not tended during the winter months when the Northumberland Strait was frozen solid, but during the Second World War it was kept open as the Air Force used it as a navigational landmark. During these years, on a fateful day in October, a freak snowstorm developed causing white out conditions. A pilot in training from the British Commonwealth Air Training Base in Summerside swooped low out of the snowy sky, narrowly missing the school house and Lighthouse itself. The plane crashed into the sea and neither pilot nor plane were found for some months.

1955-1956 - Norman Gillis was born and raised on Point Prim. While he worked both as a lobster man and a farmer, he loved farming the best and when returning from duty after World War II he bought his farm on Point Prim. During a period of lightkeeper transition he graciously served a 6 month term until a permanent keeper was commissioned.

1956-1969 - Manson Murchison served a brief one week term in September of 1955 before being officially appointed as lighthouse keeper in 1956. It was during his term that the daunting job of re-shingling and painting was done in 1958. In 1969, when Point Prim lighthouse was automated, he went to Caribou, NS, to tend the light there for two years. In 1972 he returned to PEI and worked intermittently at the Wood Islands lighthouse. He worked and lived by the sea for most of his life and like all the light keepers who came before him, the sea was in his blood. After retirement, when asked what he missed most about the light keeper’s job. he had a hard time putting it into words. Finally he said, “It’s the way the moon shines on the water on a calm summer night.”
All the hard times forgot, the driving wind and bitter cold, the long nights and heavy work. What kept these men going was an almost indescribable love of the sea.

Government of Canada. The Point Prim Lighthouse Society is in the final stages of assuming ownership.

Because of its age, unique architecture, and the fact that it is virtually unchanged from its original state, the Federal Heritage Building Review Board awarded it the designation of Classified which is the highest level awarded. It is the only lighthouse on PEI to have that designation.

Point Prim Lighthouse was recognized as a heritage place under the Prince Edward Island Heritage Places Protection Act on October 3, 2012. 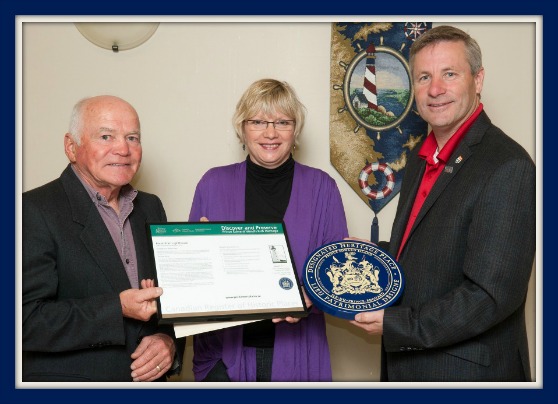