The Island's tallest lighthouse stands on a sandy beach at the tip of West Point where the waters of the Northumberland Strait and Egmont Bay merge. It is a square tapered lighthouse standing 67'8" tall. The cedar shingles are painted white with wide black horizontal stripes on each of the four storeys.

The lantern deck is supported by a cornice with decoratively carved wooden brackets. It is surrounded by a wooden cross-braced railing. There is a dodecagon (12 sided polygon) shaped lantern with nine glass windows and three metal walls on the inland side. A flashing fourth-order Fresnel lens, manufactured in Paris by Barbier, Benard & Turenne is used in the lantern.

Tall narrow windows are banked vertically on the three seaward sides of the tower, and have a slightly pedimented cap which is repeated over the doorway. The inland side of the tower, is painted white (no day marks), and has only one window on the upper level. There are attractive double doors leading into the tower.

West Point Lighthouse has a rebuilt one and a half story dwelling with a veranda and an attached shed. There is a ramp next to the lighthouse that leads to the back deck and connects with the northwest side of the lighthouse, where there is a two storey inn with private seaside balconies and verandas. Steps at the southern end of the stone and timber seawall lead from the lighthouse to the beach and join the 1.5 km board walk through the Cedar Dunes Provincial Park. The Fairy Paths Nature Trails extend through the wooded areas adjacent to the lighthouse.

North Cape Coastal Drive - Take Route 2 west to Route 14. Turn left on Route 14 at Coleman Corner. Once you pass the Welcome to West Point, it is less than 1 km to where you turn left onto Harbour Road. At the West Point Harbourside Centre, turn right onto Cedar Dunes Park Road, which leads to West Point Lighthouse.

"As the first lighthouse built by the Federal Government on Prince Edward Island, the West Point Lighthouse is associated with the transfer of responsibility for the aids to navigation from the Colonial Government to the new Federal Department of Marine. A design change from the octagonal to the square tapered towers coincided with the new administrative regime. "

Originally painted white with broad red horizontal stripes, these stripes were changed to black in 1915, as black is more fade-resistant and provides more contrast.

Pictures taken in the 1890's show a unique system of windows which were not shown in 1923 photos. It is thought this was the only Island lighthouse that had windows which swung open on the interior and exterior like a door. Between those door-like windows, there was a regular vertical sash window that that lifted upwards. These unique windows were on the west and north sides of the tower. The hinges and fastenings for these windows can still be seen on the interior and some of the exterior window frames.

This is the only Island lighthouse that had a dumb waiter which transported oil from the first floor to the fourth floor light room.

From 1942-1945 the light was kept operational during the winter as a night time guide for pilots at the British Commonwealth Air Training School at Mount Pleasant.

When electricity was installed in 1963, the light keeper, Bennie Mac Isaac, retired. The dwelling was torn down and within a couple of years the barn and oil house were relocated as well. The wooden railing on the lantern deck was replaced by a metal one. The double doors to the tower were replaced by a single door. The Coast Guard wanted to check the structure for rot, so they stripped all the interior plaster from the entire third floor and removed the south window. The tower stood alone for twenty years. The exterior was kept in excellent shape but the interior suffered from vandalism.

In 1983, the lighthouse was leased to the newly formed West Point Development Corporation. During the winter the dwelling was rebuilt using original plans for the exterior. The interior was developed as a three room inn and chowder kitchen. A museum featuring lighthouse pictures and equipment was developed in the tower. It opened on July 1, 1984, as Canada's only Inn, in an active Coast Guard Lighthouse.

In 1984, a craft shop featuring local artisans was opened in the former lean-to shed. A craft shop was constructed next door in 1985, and the chowder kitchen expanded to the old craft location.

By the end of 1986, the business was outpacing the current accommodation and dining facilities. In 1987, a large dining room, commercial kitchen and 6 bedrooms were created in a new wing on the northwest side of the light tower. About the same time, the third floor window and the double doors to the tower were replaced.

In 1991, the lantern was removed and the entire lantern deck and railing were replaced. The next major changes took place in 2003. Over the years water falling from the lantern deck hit the lower levels of the tower, causing extensive damage. Because of rot, the framework, timbers, and shingles had to be replaced on the lower twelve feet on three sides of the tower.

In the winter of 2009 - 2010, the 1987 extension was totally renovated and expanded. The kitchen and dining room were relocated to the Harbourside Centre.There were eleven new rooms added with private balconies on two levels. This made a total of thirteen rooms. It is now a four star inn.

A series of devastating storm surges culminated in the most severe one in memory, which hit on December 23, 2010. It resulted in the trees, dunes, and boardwalk being swept away from the front of the Lighthouse and seawater flooding the parking lot, lighthouse basement, and reaching the very doors of the inn. A protective seawall was constructed in the December 2011. 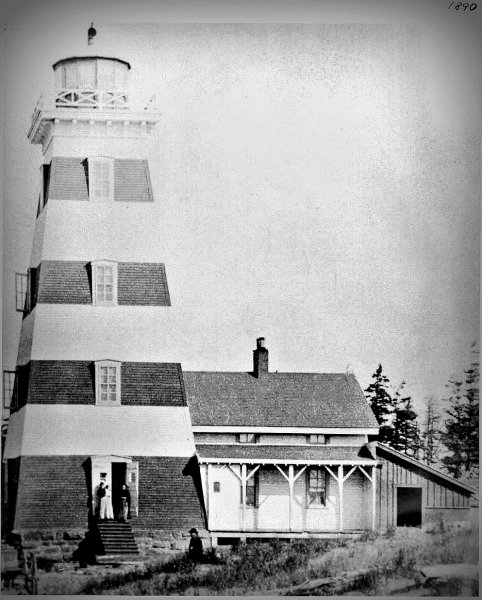 In West Point's eighty-eight years of being a staffed lighthouse, there were only two keepers.

"When William Mitchell, the Department of Marine agent for Prince Edward Island, visited West Point Lighthouse in1878 he found its first keeper, William McDonald, to be very attentive. In his official report, Mitchell wrote, “I must say that the clean and comfortable state in which I found the whole premises was a credit. The light apparatus appeared in as good order as when first put in operation.”

William Anderson Mac Donald received the " Imperial Long Service Medal" for fifty years of long and faithful service, presented by the Honourable A. E. Mac Lean when he retired in 1925 at the age of 79.

Bennie Mac Isaac was a veteran of World War I in the 105th Battalian, serving in Canada, England, France and Belgium. He was wounded in 1918 and spent a year in hospitals in England and Halifax,NS. He became the light keeper in 1925 following the retirement of William Mac Donald. During the Second World War, he worked night and day operating the radio-telephone equipment and the light, to guide ships and planes travelling the vicinity. Although he could have retired earlier, he remained as keeper until electrification in 1963, for a total of thirty eight years.

The West Point Lighthouse was the first lighthouse on Prince Edward Island to be transferred from the Federal Department of Fisheries and Oceans to a non profit community group - West Point Development Corporation.

The official transfer occurred on April 19, 2002 and the transfer of documents were delivered to the Corporation on May 21, 2002 which was the 126th anniversary of its years of service.

Cedar Dunes Park, showing West Point Lighthouse, was chosen as one of fourteen national and provincial parks sites featured on a Canada Day 1993 series of postage stamps to commemorate the 100th anniversary of the opening of Canada's first national park, Algonquin Park.

The West Point Lighthouse is featured in the series Entrepreneurship for Canadians:The Spirit of Adventure which is presented by the Canadian Foundation for Economic Education. It was one of only two, not for profit businesses featured.

The West Point Lighthouse is featured in an exhibit of the Virtual Museum of Canada. It is called New Life for an Old Light.

West Point Lighthouse was recognized as a heritage place under the Prince Edward Island Heritage Places Protection Act on November 1, 2012. 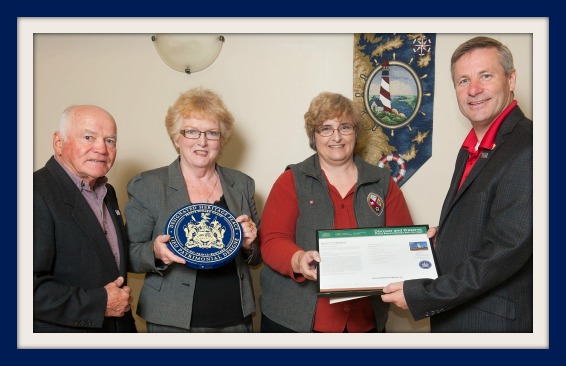