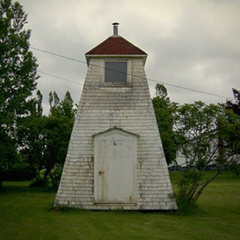 Douse Point Front Range Light - Is a small square, pyramidal tower which is 4.9m (16') high. There is a vent in the centre of the roof which is still shingled red. The navigation light shone through a window above the door. It has an old fashioned planked door topped with a pediment. At some point it has been painted white, and has now faded to grey. On the upper part of the tower, under the window, you can still see the remnants of the old black horizontal daymark.

It is one of the three lighthouses on the Island that is most urgently in need of maintenance and repair.

Points East Coastal Drive - From Main Street (Route 4) just south of the center of Murray River, turn east onto Gladstone Road where you will see the Douse Point Front Range Light on your left.

Although this light is on private property, it can be viewed from a public road. Not open to the public.

William Douse was the land agent for Lord Selkirk. In 1845 he arranged the transfer of the land for the Point Prim Lighthouse from Lord Selkirk to Prince Edward Island.

The Douse Point Range Lights were established in 1899 and were converted to battery power in 1962. A few years later, power lines were extended to the point.

The lights were decommissioned on March 9, 1984 and eventually privately purchased in the late 1980's by the Buell family. They were relocated to Murray River, where they have gradually fallen into a state of disrepair.

Looking at early 2000 photos taken by Kelly Anne Loughery of this range light, you can see a dark vertical daymark extending from the window to the ground. In her photo you can also see faded reminents of a broad black horizontal daymark.

An exerpt from a letter written from Dave Hunter to Kelly reads as follows:

"Incidently, in my original message, we mentioned our trips to light the lamos in the houses with Kenny MacLeod, ( who lived on the road now known as the Upper Cove Road), the last lighthouse keeper before they were electrified. Before him the keeper was Walter MacLeod also from just up the roadI(he lived rigth across from the old schoolhouse in the house now owned by Enman's).

He used to come down to light the light on the lamps with an old horse and cart. I remember it well, as his horse was always dressed up in an old straw hat with holes cut out in the brim for its ears! Many times we took the same trip with him as well. Both men are now dead. "