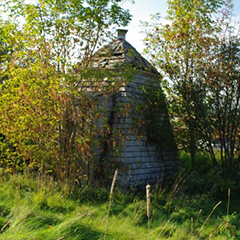 Brush Point Front Range was located on the south side of the Orwell River. To enter the river, vessels would use the Douse Point Ranges to clear China Point and then pick up the Brush Wharf Ranges to reach the wharf.

It was a square white tapered tower 15 feet high. Today it is a small unpainted wooden tower in an "extreme state of disrepair". The white paint is gone, turned grey, and there are only a few touches of red surrounding the roof vent and the shed dormer over the window. There is a second smaller window that the navigation light would have shone through. The door way extends vertically like a porch from the sloped side of the tower, topped with a shed dormer.

The interior was finished with matched boards, built to the standards of the late 1800's. It was painted white and still remains so today. Mildew is visible on the walls, and no glass remains in the windows.

The trees are growing around and into the small tower, thus hastening the destruction of this gallant beacon of by-gone days.

Although this light is on private property, it can be viewed from a public road.

The Brush Wharf Range Lights were described as follows in The Gulf and River St. Lawrence published in 1908 by the U.S. Navy's Hydrographic Office.

'A square white lighthouse, 15 feet high, on the western side of Brush Wharf, exhibits, at 18 feet above high water, a fixed green light, which should be seen, in clear weather, when in alignment with the following light, 2 miles.

Brush Wharf, also known as Port Selkirk Wharf, was located on the south side of the Orwell River. To enter the river, vessels would use the Douse Point Range Lights to clear China Point and then pick up the Brush Wharf Range Lights to reach the wharf.

By 2011 the condition of this lighthouse looks beyond repair. Trees are growing through it, and the window has no glass.

It is the lighthouse on the Island that is most urgently in need of maintenance and repair. Action needs to be taken now before it goes completely beyond repair.

The Brush Wharf Front Range Light has been relocated to private property not too far from where it once served. The status of the companion Rear Range light is unknown.

"Incidentally, in my original message, we mentioned about trips down to light the lamps in the houses with Kenny MacLeod (who lived on the road now known as the Upper Cove Road), the last lighthouse keeper before they were electrified.

"Before him the keeper was Walter MacLeod also from just up the road (he lived right across from the old schoolhouse in the house now owned by Enman's). He used to come down to light the lights with an old horse and cart. I remember it well, as his horse always was dressed up in an old straw hat with holes cut in the brim for its ears."

Many times we took the same trip with him as well. Both men are now dead."

Historical recollection by David Hunter, of an email sent to Kelly Anne Laughery in 1/30/07.

Located on "private" land not far from its original location.