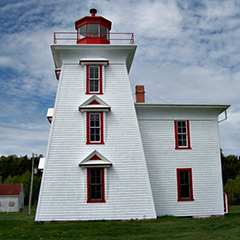 Blockhouse Point Lighthouse - The tower is 12.m (41.3 feet) high and has an octagonal lantern surrounded by a deck with a metal railing. The lantern deck is supported by a curved cornice. The upper windows on the tower, and one of the doors have highly decorative shed dormers accented in red. The second floor and ground floor windows have highly decorative classical pediments. The windows and door frames, etc. are trimmed red.

The ground floor of the dwelling was designed with a kitchen, a parlour, and two bedrooms. The second floor has four more bedrooms and a smaller room which is currently used as a bathroom.

Red Sands Shore Drive - From Charlottetown, travel southwest on Highway 1, then take Highway 19 south passing through Meadowbank. Shortly after the bridge, follow Highway 19 east to Fort Amherst/Port La Joye National Historic Site. When you near the southeast tip of the peninsula, go east on Blockhouse Road from Highway 19 and continue to its end at the Blockhouse Point Lighthouse.

Many people believe that Blockhouse Lighthouse was the second lighthouse on Prince Edward Island. In the Journal of the House of Assembly for Prince Edward Island of 1846, it is recorded that Thomas Owen was paid10 pounds for "the expense occurred by him in constructing a Lanthorn at the Blockhouse, as a Harbour Light for Charlottetown, and keeping the same in operation." In 1856 a more substantial structure was constructed. John Smallwood was paid 46 pounds "for building and fitting up a place on the upper part of the Blockhouse for a light." This was not considered a lighthouses as it was not included in the list of lighthouses which were on PEI when it joined Confederation in 1873.

The present lighthouse was built in 1876, serving as an outer harbour light for the Charlottetown Harbour. 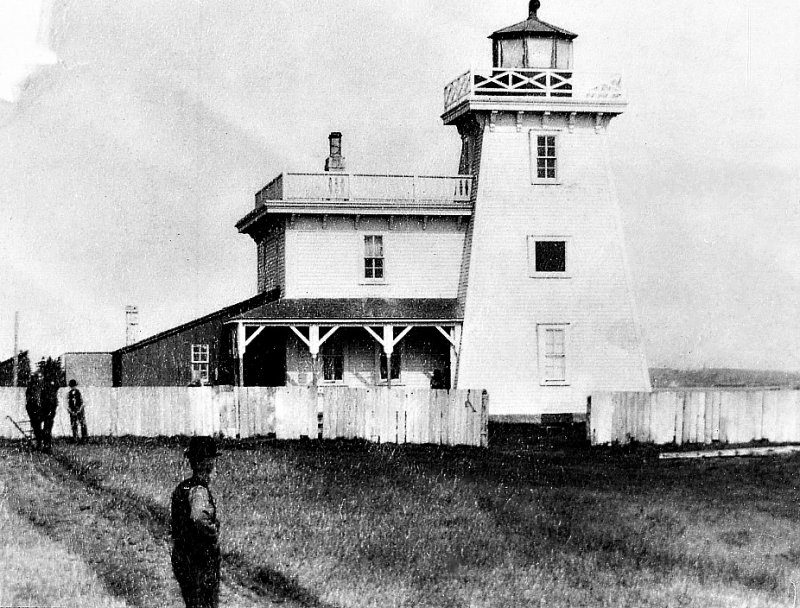 In the 1890's photograph, the lighthouse is shown with a railing surrounding the roof of the flat roofed dwelling.

The early picture shows a wooden cross braced railing on the lantern deck which was supported by open brackets. There was also a veranda on the south side and an attached shed. The size and shape of windows has been changed since then and pediments have been added over the windows in the tower. A high wooden fence surrounded the lighthouse at that time.

FHBRO Report #90-251 states that these changes occurred between 1890 and 1914 (perhaps after 1906). A porch which ran down the dwellings south elevation was removed about that time, as was the dwelling's roof balustrade and an attached shed. 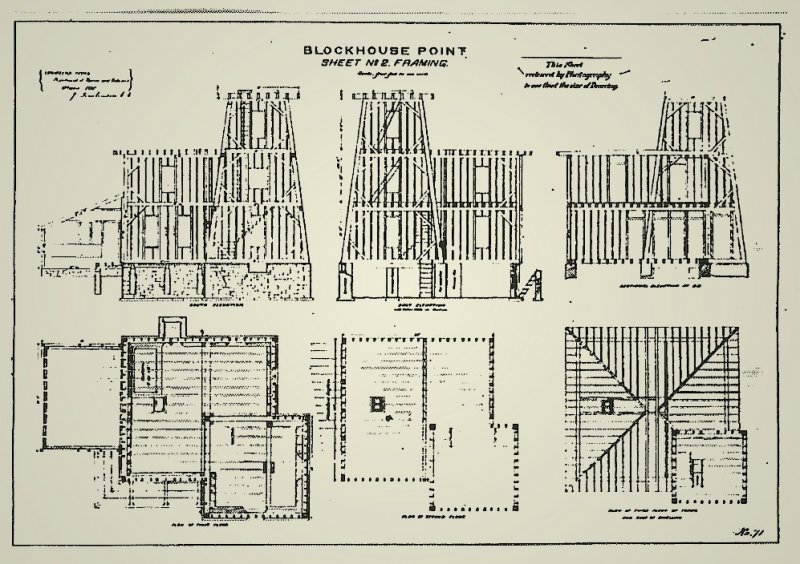 The lighthouse is owned by the Government of Canada. A group has formed to obtain ownership through the Parks Canada Heritage Lighthouse Program.