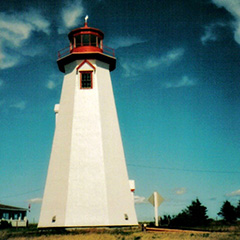 The Seacow Head Lighthouse is an octagonal tower 60' tall with each side measuring 11'.3" wide at the base.

According to the FHBRO building report, it is a particularly well-proportioned example of a classically- inspired design, with large pediments over its windows and door, and an elegant flared cornice at the top of the tower. The underside of the cornice is painted red. These classical elements were added to the rather plain original tower sometime between 1890 and 1921. The tower is a heavy framed structure. It was likely morticed and pinned, and "the whole to be screwed up tight and firm with wrought iron screw bolts," as were other towers on the Island from the same era.

An interesting feature of the lantern, is that while the part below the windows is round, the roof and windows are 12 sided polygons, which is called a dodecagon shape. There are round air vents under each section of the circular part of the lantern. Over each of the 12 sections there are metal hand or foot brackets to aid in painting and maintenance tasks. There is a metal service ladder from the lantern deck up to the top most vent.

The Seacow Head, North Cape, and Cape Jourimain light towers are often called Sister Lights. Constructed in1863, the Seacow Head Lighthouse has an octagonal wood-frame, and is among the oldest wood-frame towers standing in the Maritimes.

Seacow Head and Jourimain were built in the narrowest passage of the Northumberland Strait as aids to navigation for fishing boats and other marine traffic passing through the Strait. They later served the CNR Ferries plying between Port Borden, PEI, and Cape Tormentine, N.B. Each was the first permanent Lighthouse on its site.

At this time there were only two other lighthouses, Point Prim (1845) and Panmure Head (1853). There were lights, possibly on masts, on Blockhouse Point, Summerside, Fish Island, and Cascumpec.

In 1902, the tower was repaired, re-shingled, and re-decked. A new cast iron lantern was installed as well. In 1906 the fixed white catoptric light was replaced with a petroleum vapour fourth order double flashing light constructed by Barbier, Benard & Turenne of Paris.

1865-1867 - Malcolm MacFarlane - For the first two years of operation, seal oil was used which meant the lamp wick had to be trimmed every two hours. His assistant, William Mac Callum, attached to an alarm a device which would the bed clothes off when the alarm clock sounded, thus awakening him to tend to the light.

Family members believe there was an error stating that E. O'Ronaghan was a keeper. He is believed to have been in the North at that time. They believe Peter kept the lighthouse until 1919, giving him 46 years of service which at that time made him one of the longest serving keepers in eastern Canada.

1919-1946 - Thomas J. Ranahan - He served 28 years and was awarded a Meritorious Service Medal by the Canadian Department of Transport. He was born in the Seacow Head Lighthouse.

The Government of Canada owns this lighthouse. A local group, Seacow Head Lighthouse Inc. has petitioned for ownership under the Parks Canada Heritage Lighthouse Program.

The Seacow Head Lighthouse was used in some of the filming of the TV series Road to Avonlea. Most of the filming was done in Ontario using mock up stage sets.

Seacow Head Lighthouse was recognized as a heritage place under the Prince Edward Island Heritage Places Protection Act on October 3, 2012.

On September 25th 2013, the Seacow Head Lighthouse was awarded a Provincial Designated Heritage Place plaque and certificate from the Honourable Minister of Tourism and Culture, Robert Henderson. 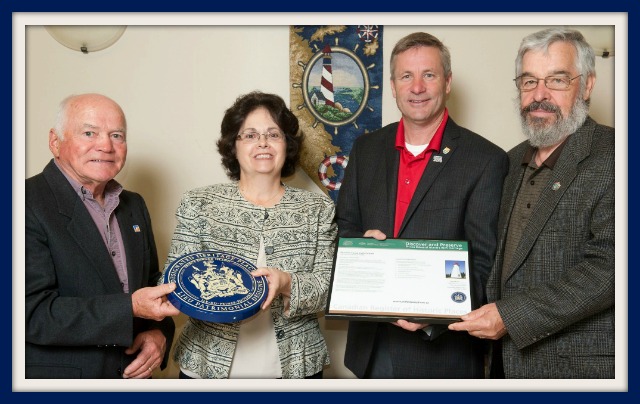